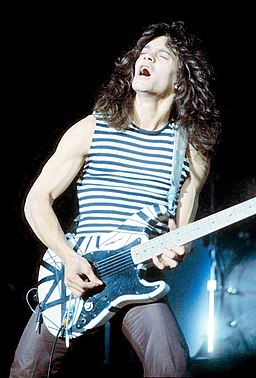 Every rock guitarist alive in the 80s regarded Eddie Van Halen as a god. It's the truth. While Eric Clapton, Jimmy Page and others were influences that Eddie would often acknowledge, he took the art of rock guitar to another level, literally inventing techniques that would influence countless other guitarists to follow.

His melodic chops were honed by an intense admiration for Clapton. It was an admiration so great that he said he learned all of Clapton's Cream solos "note for note" when he first started playing.

As he progressed, becoming the main songwriter for his self-monikered group, he introduced finger-tapping to the world and creatively sprinkled in harmonics and blistering double-picking as well. The resultant solos were endlessly inventive and at times downright unearthly.

Often overlooked, but just as brilliant, was his talent for creating great hooks and his way of weaving rhythm guitar segments together to create tracks that were never formulaic and, quite simply, rocked.

Onstage, Van Halen the group always came off as the fun bunch, yet somehow Eddie was able to replicate his amazing guitar virtuosity amongst the antics of that setting as well. While the group was certainly great, Eddie's incredible talents as a guitarist and songwriter were what ultimately brought them legions of loyal fans.

While it was rare that he would guest on other artist's material, he was able to add his signature to Michael Jackson's "Beat It" with a memorable solo that ultimately brought he and his group even more exposure.

As a merry-go-round of vocalists came and went over the years -- David Lee Roth, Sammy Hagar, Gary Cherone, Hagar again, Roth again -- and as fine a showman and vocalist as each are, and as much as brother Alex on drums and bassists Michael Anthony (and later son Wolfgang) mightily contributed, it was clear that Van Halen's success as a group was down to one key element: Eddie.

And now, along with the other calamities defining 2020, Eddie is gone and fan hopes for new VH tour dates are dashed forever. While that wish can no longer be fulfilled, we can all be thankful that whenever the world loses an artist they leave their musical legacy behind.

Their music lives on like a gift to the world that will never disappear and that gift is better than any memorial that can be erected or tribute that gets written. So with that, let's enjoy a few choice isolated Eddie Van Halen recorded moments:

Eddie Van Halen isolated guitar and keyboards on "Jump" from 1984:

Check out our current selection of Van Halen memorabilia here.